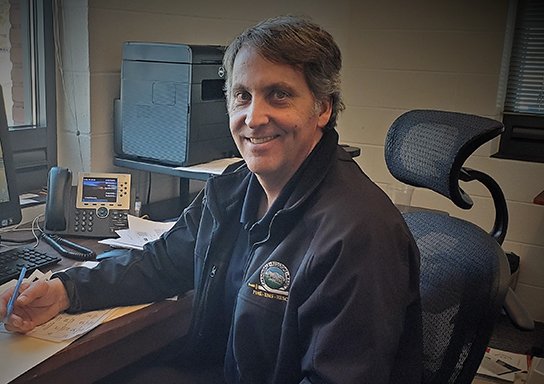 Big things are happening in 2020! The Carbondale Fire District is excited to welcome Mike Wagner as the new Division Ops Chief. The whole team is in agreement that no one is more deserving of this role, so we want our community to get to know who he is as a chief, teammate, and friend.

Mike has been living in the Roaring Fork Valley and serving with the Carbondale Fire Department since 2012. He moved to the valley from Arvada, CO where he originally worked in real estate and insurance, but decided he wanted to make a change in his life and became an EMT at the age of 40. He transitioned from the business world to work for a private ambulance service in Denver. At that point there was no turning back, Mike knew he found a job that he wanted to continue on with.

What made you decide to become a firefighter?

“I had been in the business world and decided that I wanted a change. I heard that Arvada Fire had volunteer positions open, then proceeded to get my EMT and liked it so much that I applied to work for a private ambulance service in Denver. When my family moved up to the RFV, my daughter attended St. Stephens and I happened to see a command truck in the parking lot. I just walked up, knocked on the window and asked where I could volunteer in the valley. The man in the truck happened to be Gabe Muthing, the director of Aspen Ambulance, and without hesitation told me about Carbondale Fire.”

Mike volunteered with Carbondale Fire for three years and was hired as a Firefighter/Paramedic in January 2016. While working and volunteering, Mike also attended paramedic school (which is not something that people usually do – it’s being a full-time student for 3 semesters!) and received his Paramedic certification.

What experiences have helped you most in your line of work?

“I think working in the customer service industry, treating people with respect and empathy, has really helped to be successful in this work. Being a dad has also helped to provide that necessary comfort and care. When we are being called, it’s usually to help people on their worst days, so remaining calm and under control and knowing how to comfort them through the situation is crucial.”

What are some of your duties as the Division Ops Chief?

“I manage and supervise our overall emergency operations and work closely with our other leaders, staff & volunteers. One of my primary duties is making sure that crews are set up for success and that we can safely and effectively manage incidents.”

Mike is on call for one 24 hour shift per week and every fourth weekend he is on from Friday at 8am to Monday at 8am. He is currently heading up a project to purchase a new fire truck and ambulance for the department and working with manufacturers to get the best equipment for the station.

What are your long term goals for this position?

“I am constantly trying to uphold our vision and mission statement. It’s something I really believe in. I want to continue to build upon the organization.”

What are some of the biggest rewards of your job?

When I asked Mike this question, he went to grab a letter that he received from the wife of a man who had suffered from a stroke and is alive today due to the crew’s timely response. A snippet from the letter reads “Thank you for giving me more time with my best friend and soulmate, the love of my life…”

He said that working with a great team and being there to help people on their worst day is the one reason he loves his job so much. Mike is a very humble man and mentioned a few times that one of the best parts is the anonymity of the job, that no one really remembers who was there. They just remember that someone was watching over them and doing everything in their power to get them help.

How has your job affected your lifestyle?

“It’s great to have a job that you feel good about. This is my dream job, but it comes with new balances. My kids are grown and out of the house and so now I am shifting priorities.”

One quote that Mike mentioned numerous times throughout the interview was “Slow is smooth, and smooth is fast.” This seemed to be his approach to most aspects of his job. Making sure that everything is set up for success and that the team is confident in their abilities. Being stable and under control from the beginning helps them to efficiently provide assistance when needed.

Mike enjoys all that Colorado has to offer. In his free time, he likes to hike, bike, ski, play hockey, and hang out with his family. He has a daughter and two stepsons, all of whom he is very close with and proud of. His kids are now grown and live outside of the valley, but they still make time to get together and catch up. Some of Mike’s favorite bands include Phish, Widespread Panic, Dave Matthews Band, and The Allman Brothers (the man loves his jam bands!) He also admits that his daughter has recently gotten him into Post Malone.

Jenny Cutright said that everyone at the department is thrilled that Mike got the job and after getting to know him through this interview, it makes perfect sense. Mike exudes the calm, caring nature that you would want in a Division Ops Chief and there is no doubt that he will do great things for the department.